More than 80 clubs at 13th EFDN Conference in Barcelona

More than 80 clubs at 13th EFDN Conference in Barcelona

Oriol Tomàs, the Board of Directors of FC Barcelona and Barça Foundation members, welcomed the attendees and outlined the work that Barça Foundation have done during the last 25 years. He also congratulated EFDN on its 5th anniversary and highlighted the importance of collaboration in CSR: “When we are not on the field, we have to join forces for our common goal: to improve the lives of people living in difficult situations.” Ton Strooband, Chairman of EFDN and Head of Social Affairs at Feyenoord summarised the most recent and upcoming EFDN activities. He said: “We are looking forward to supporting our members even better in 2020 and becoming a more important voice in Europe.”

Afterwards, Maria Valles, General Manager at Barça Foundation explained how the foundation uses sport as a tool to prevent violence. She said: “We have established projects in 58 countries with over 1,6 million people who benefit from those projects. Sport is an amazing tool to tackle bullying because in practice children behave in a spontaneous way and learn faster through the spirit of sport. Bullying is one of the main concerns of young people. We have to work together to eliminate it from schools and youth football.”

During the first session of the Teambuilding Roundtables, participants had the opportunity to introduce themselves and their organisations, as well as to share their best practice programmes. The main purpose of the Teambuilding Roundtables is to link like-minded practitioners and organisations in order to broaden the participants’ perspectives, to enable the identification of ways to improve the impact of their local programmes and perhaps even to create opportunities to work together and exchange information going forward. 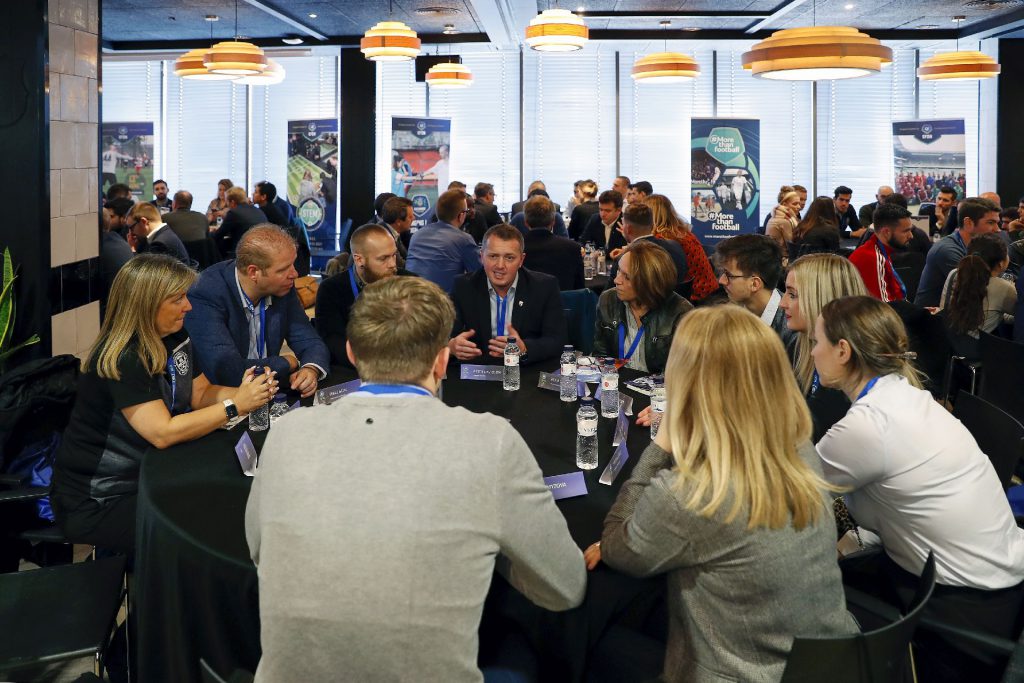 After the More than Football Awards’ presentations, EFDN CEO Hubert Rovers presented all EFDN’s services and explained the different opportunities for collaborating on a European scale. EFDN has published new guides and manuals on different topics and started to deliver new Pan-European programmes like Scoring for Health and Show Racism the Red Card together with our members. Rovers said: “Five years ago, there was a dream and 7 people, today there are 180 participants here in Barcelona with the plan to develop even further in 2020.”

Angelika Arkadi presented AEK Athens’ CSR strategy. The Greek club works on a broad range of initiatives focusing on employment, education, social deprivation, crime reduction, youth offending and the integration of refugees. Filip Lundberg represented ENABLE Sweden and explained how ENABLE Sweden has contributed to a positive and sustainable development of Swedish football by bringing clubs, fans and police together and how the organisation has helped to contribute to a more nuanced, knowledge-based and inclusive public debate about the opportunities and challenges that football offers. David Dale, CEO at Football Aid explained how his organisation, in collaboration with partnering clubs, makes dreams of fans come true and raises funds for charity.

Hilton Freund discussed the Twinning Project that aims to bring professional football clubs and prisons together across the UK, using football as a catalyst for change. The project is a demonstration of how football in the UK is giving back to society by providing offenders with employability skills and educational opportunities whilst in prison. Aisha Al-Said,  Head of Partnerships, Innovation and Knowledge at Barça Foundation, discussed with the attendees, how football, and sport in general, contributes to achieving the SDGs and creating a more peaceful, sustainable future for all. Nicky Reid explored the relationship between club trusts and the SPFL Trust in areas of project delivery, capacity building, and lobbying.

Lucie Venet presented the CSR work of OM Fondation and a new initiative called “FC La Castellane”. The club is more than just a sports structure. It is used as a vehicle of key values to guide the young players in this underprivileged area. The new programme is part of the vision of the club to become an impactful social actor fully integrated within the city of Marseille.

Before the More than Football Award ceremony, Greg Baker (Saints Foundation), Guiomar Todo (Barça Foundation), Balint Mate (Ferencvarosi TC) and Hubert Rovers (EFDN) discussed the idea of players pledging 1% of their salary to their club’s charity. All three clubs/ foundations have already initiated actions similar to the proposed 1% Fair Share initiative. Baker said: “1% won’t change the world of the player but can make a huge impact in their local community.” Rovers added: “Players benefit from this initiative and create a close bond to the fans. Five years ago it was not common that players were ambassadors of community programmes, now its a normal thing in CSR in football. We hope to achieve the same for the 1% Fair Share initiative.” Therefore, EFDN will support the members with guidance and will share best practices with them too. 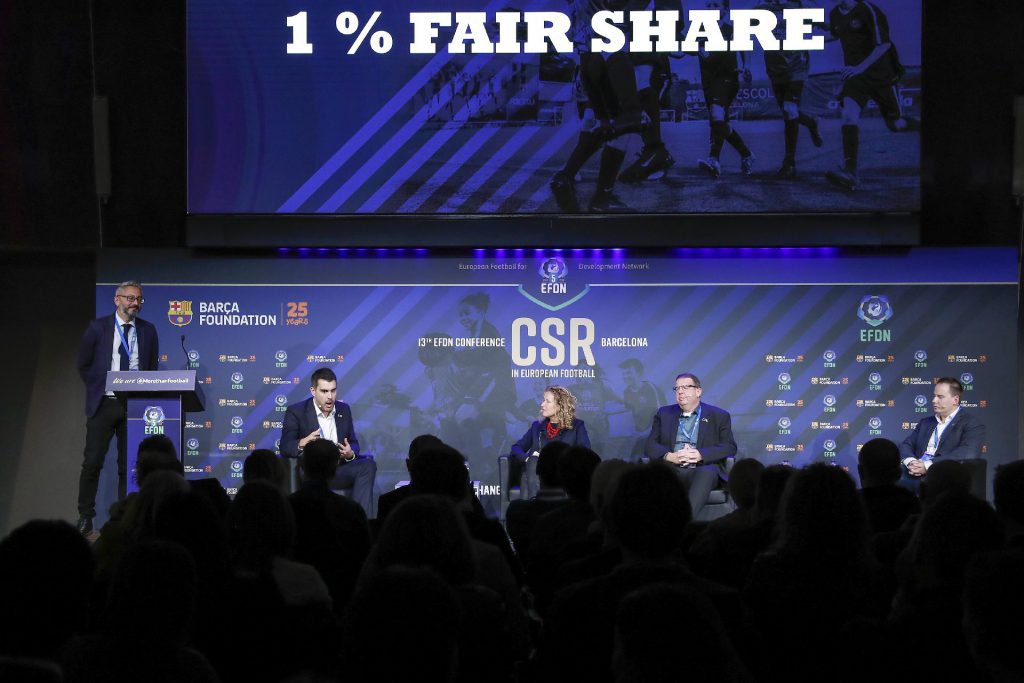 The goal of the More than Football Award is to honour the best social initiatives in Europe delivered by a European club, league or FA. Shakhtar Social won the first More than Football Award, as EFDN members chose the project “Come On, Let’s Play!” as the winner. “Come On, Let’s Play!” promotes football, social inclusion and values throughout Ukraine. Shakhtar Social delivers the project at more than 50 playgrounds in 28 different cities and towns in Ukraine.

Inna Khmyzova, Director of Shakhtar Social Foundation received the award from EFDN CEO Hubert Rovers. Kmyzova said: “It is an honour to receive the More than Football Award. This award is not only a recognition but also a great motivation for us to continue with the “Come On, Let’s Play” and our other programmes.”

All 4 shortlisted organisations presented their project in a 15-minute presentation at the Auditorium:

More information on the More than Football Award here.

We kicked off Day 2 of our 13th EFDN “CSR in European Football” Conference in Barcelona with 15 engaging roundtables. The second session of roundtables offered more than 170 attendees the opportunity to have a more in-depth discussion on one specific topic.

The attendees shared best practices in fields like health, education, discrimination or dementia and gave an insight into organisational challenges. The representatives of clubs, leagues, FAs and other social organisations presented ideas for collaboration at a European level. We discussed the role of EFDN and collected ideas for future actions. 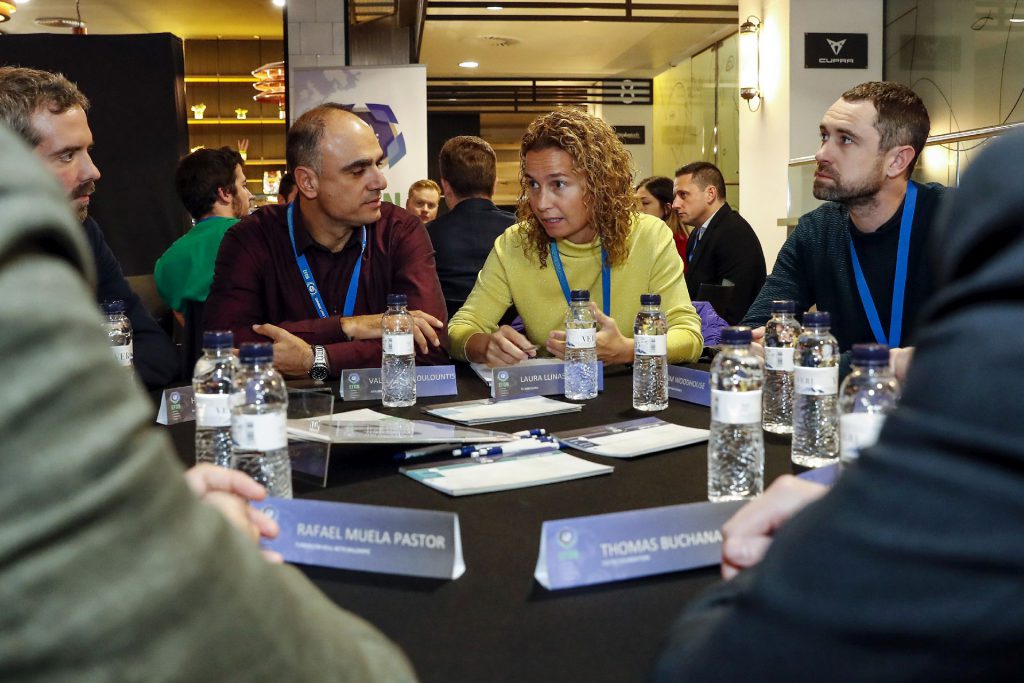 Afterwards, the members were able to witness the first three Breakout Sessions of Day 2. Mental health, stadium accessibility and STEM education were on the agenda. Sarah Medcalf presented Be a Game Changer, a campaign to encourage people in Newcastle, in particular men, to talk openly about mental health and to provide tips on how to improve their physical and mental well-being. She said: “The idea for the programme was developed by asking ourselves what kind of issues we are facing in the North-East of England. Mental Health is a big issue in our community, mainly among the male population. But men usually do not commit to mental health campaigns, but rather to a football campaign and that’s why football is such an efficient tool in that programme.” 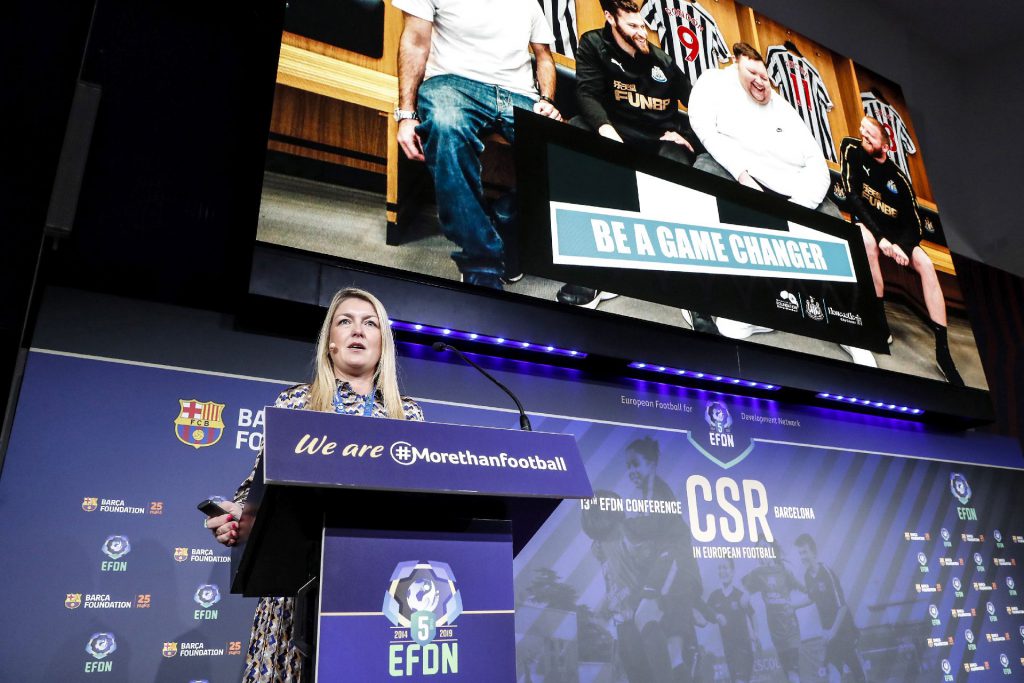 Jochen Kemmer, Disability Access Officer at CAFE explained what stadium accessibility means and showcased some best practices. The examples cover a broad range of measures including accessible parking, accessible signage to accessible seating options, and various other services for the needs of disabled fans. Craig Wilson (Big Hearts) presented the CSR work of the community trust with those who are the hardest to reach in their community. Together with Tanya Howden (Robotical), Wilson talked about the initiative “Digital for all” and the Digital Skills Hub at Heart of Midlothian FC which gives all young people the opportunity to develop digital skills and to be creative with technology.

Afterwards, the attendees saw the last three Breakout Sessions focusing on fundraising, social media and creating a holistic CSR approach. Thomas Buchanan (Celtic FC Foundation) explored Celtic FC Foundation’s recent success with international fundraising ventures and highlighted the importance of partnerships: “Look out for organisations that can help you. Finding the right partnerships in countries is very important.” Greg Baker (Saints Foundation) outlined how the foundation wants to become “the best practice in the UK”. 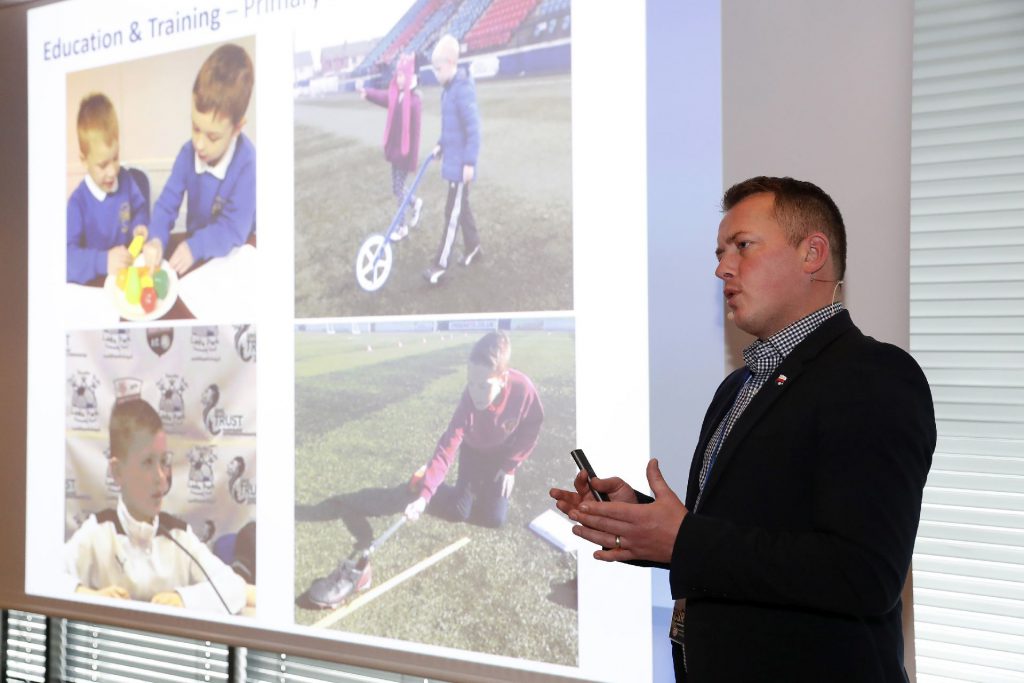 Peter Davidson and John Crawford explained how Montrose Community Trust (MCT), engages with more than 1000 distinct participants, every week, and approximately 3000 per year, through an extensive range of life changing programmes. They shared details of the values that shape their work, and that tackles issues such as supporting those that are unemployed, socially isolated, recovering from harmful addictions, living with a disability, or suffering from poor mental health. 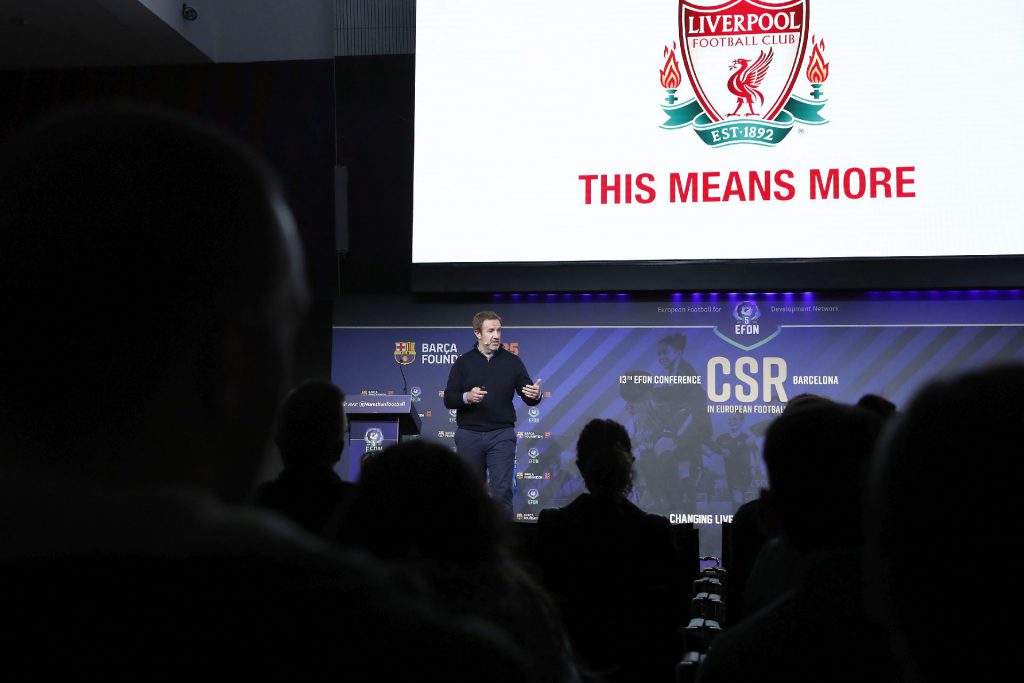 EFDN CEO Hubert Rovers (EFDN) wrapped up the 13th edition and said: “We had amazing and inspiring few days of really good networking sessions here in Barcelona. I would like to thank all our partners, speakers and especially our co-host Barça Foundation. I hope to see you again at my home town Breda on the 24th and 25th of March 2020.”

You can find more photos on our Facebook page.

The Scoring for Health programme encourages children from the ages of 7 to 13, and their parents, to adopt a ...
Read more about this project.
More News Like This
All news 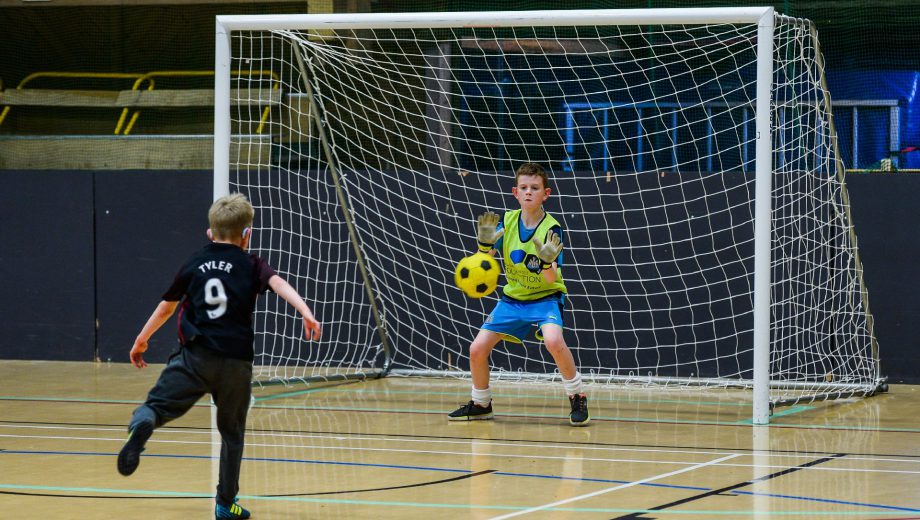 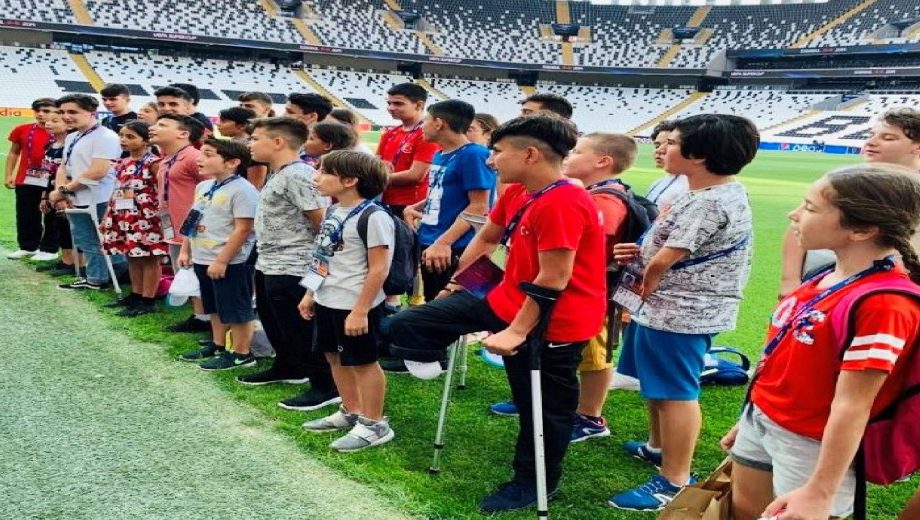 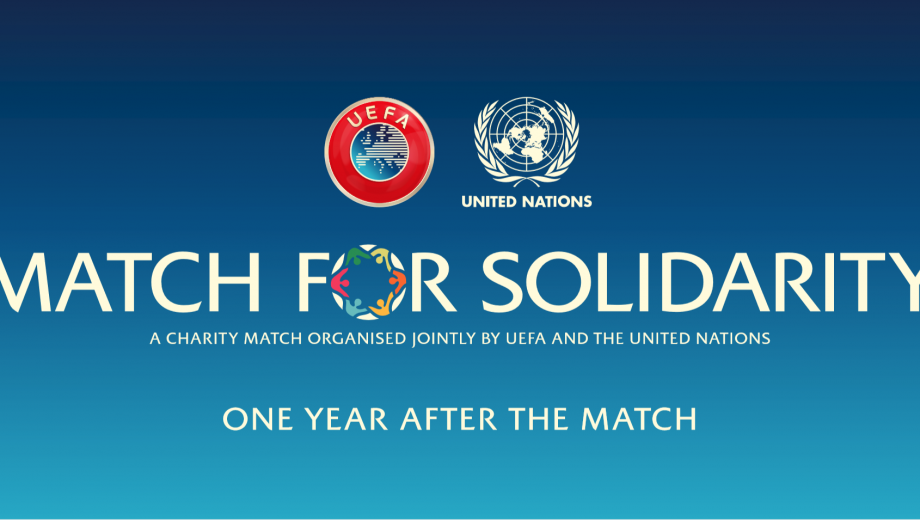 UEFA Match for Solidarity: 1 year after