A chance for children in slum regions 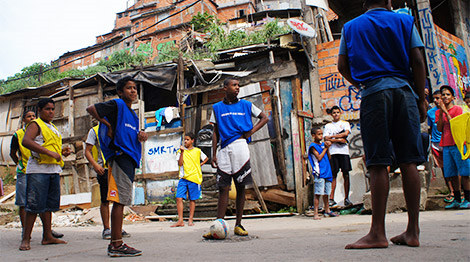 Along with Wolfsburg United, as well as other partners, terre des hommes promotes projects for underprivileged children in Brazil – offering sporting, educational and development possibilities for the boys and girls from the country’s slum regions. The goal is to support the needy children, develop their potential and strengthen their abilities.

The emphasis lies on the metropolis São Paulo. Many people here are disconnected from the economic development of the country, with particularly limited opportunities for the regions children and youths. Their daily life is plagued by poverty and a lack of education, with very few possibilities of making effective use of free-time, with few playgrounds or sports facilities. The situation leads to the youngsters being denied vitally important growth and development opportunities. One major problem is violence, an issue which has become a daily element of Brazilian society and one which affects many of the country’s children. Protection against that violence is a significant aspect of the project work being done. The children get to see there are other prospects, without having to become involved with armed gangs.

One means by which the social workers can reach the children and impart fundamental content is through sport and games: Mutual football games, or other such creative pass-times, within the protected environment of a youth centre, ensure the youngsters are less susceptible to the consummation of drugs and exposure to violence or sexual attacks. Together with the social workers, the participating boys and girls look to take the chance of earning school qualifications and improving their options on the job market.

The VfL Wolfsburg has established a Football School under der lead of Roy Präger, formal Bundesliga player of VfL ...
Read more about this project.

Aid for street kids Terre des hommes, together with Wolfsburg United and the club’s partners, support projects for children ...
Read more about this project.
Members
all members