PSV’s players come from several countries and a variety of ethnic backgrounds. Players with different skin colours, religious beliefs and cultural values play football together in pursuit of a common goal: to win the championship title as a team while respecting each other’s backgrounds. PSV’s players are the perfect example of a multicultural society.

Not just the players in the first team, but also those playing for Young PSV and PSV Women, the club’s organisation and our supporters all have totally different backgrounds. PSV is therefore strongly against any and all forms of racism and does everything it can to eliminate discrimination fromEuropean football. 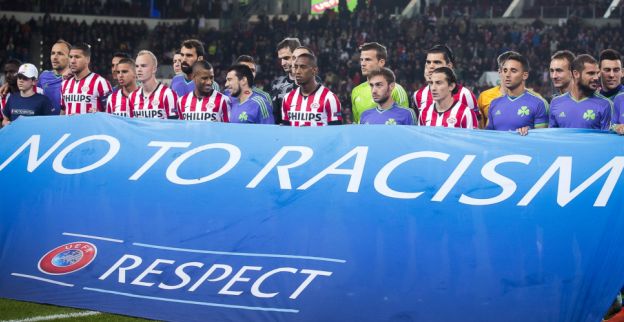 That is why PSV joined FARE – Football Against Racism Europe – and the Dutch Geef Racisme De
Rode Kaart foundation. Both foundations attempt to make supporters and other people involved in the world of football more aware that people should respect other people’s backgrounds and skin colour. That is also why PSV takes part in the annual FARE Action Week and the action week organised by the Geef Racisme De Rode Kaart foundation. During this week, PSV intensifies its battle against racism with, for example, ads on the field, the LED signs and in the match schedules.

During the action week, the children who walk onto the field with the players wear shirts made by the FARE and Geef Racisme De Rode Kaart foundations, which helps draw the public’s attention to the issue of discrimination. PSV also hosted such activities as a football tournament in a refugee centre in Eindhoven, during which children staying in that refugee centre competed against students of a local elementary school in Eindhoven. All this is done to improve the acceptance of people with a different background and to give racism a red card.

‘I decided to turn my life around’ The Dutch Street Cup is a national football competition for socially vulnerable people. ...
Read more about this project.

‘We want to get girls excited about football’ Visiting a match at De Herdgang and training with the real playersof ...
Read more about this project.
Members
all members

Randers FC
We use cookies to ensure that we give you the best experience on our website. If you continue to use this site we will assume that you are happy with it.OkPrivacy policy